NASA crashed a spacecraft into an asteroid

Perim and Socotra: Can Yemen Maintain Its Territorial Integrity?

Yemeni President Abed Rabbo Mansur Hadi, backed by the Saudi alliance, seems unable to enforce territorial unity throughout his shrunken sphere of influence. Not even against allied powers. Incidents on two islands offshore from Yemen suggest as much.

Among the greatest attractions of the Arabian Peninsula are Yemen’s mud skyscrapers, which for centuries have dominated the city skylines of Sanaa: Shibam and mountain villages such as Al-Hajjarah. But this cultural treasure does not promise its inhabitants a rich income from tourism. Yemen has been in the midst of a civil war for seven years, in which foreign powers have a significant influence.

The geopolitical situation and the civil war in Yemen

Southern Arabia gained geographic importance in the 19th century with the opening of the Suez Canal. The sea route between Europe and Asia no longer had to go around the Cape of Good Hope, but could be routed more quickly and safely through the Red Sea. Even today, the route through the Suez Canal is one of the most important global maritime trade routes, used by some 18,800 ships in 2020. 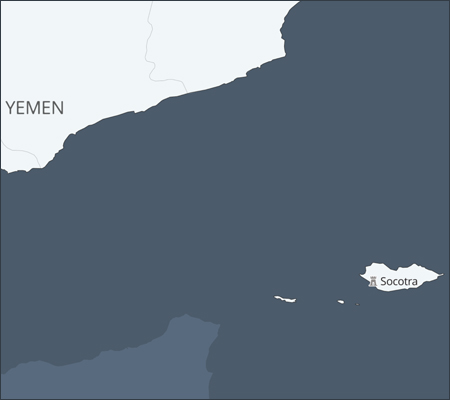 At the southern entrance to the Red Sea, the approximately 26-kilometer-wide Bab el Mandeb Strait forms a bottleneck through which two shipping channels pass: the main channel and a seven-kilometer narrow passage between Perim Island (also known as Mayun) and the Arabian Peninsula. Geographical conditions make it clear that shipping traffic can be monitored and disrupted particularly easily at this point.

It is therefore no coincidence that an international race to establish military bases has taken place in this region in recent years, largely embedded in the geopolitical rise of the People’s Republic of China and Turkey and the foreign policy concept of the United Arab Emirates (UAE), but also owed to the spread of piracy and Islamist forces in the Horn of Africa.

Since 2014, Yemen has also been embroiled in a civil war, incurring massive casualties. In the Shiite-majority west of the country, which roughly coincides with the former territory of northern Yemen, Shiites are fighting against President Abed Rabbo Mansur Hadi. Hadi bases his power on the less densely populated center and east of Yemen, with its Sunni population, where the Yemeni offshoot of al Qaeda (AQAP) has also established a power base. In the region around Aden, another faction, the Southern Transitional CounciL (STC), is fighting for independence.

Construction work on an airport for combat helicopters

Hadi, beset by the Houthis and driven from the capital, sought the support of a Saudi Arabia-led alliance in 2015, which in turn thwarted his military defeat and maintained a stalemate for years. However, there are growing signs that the recognized Yemeni government is increasingly unable to assert Yemen’s territorial integrity, even against its own international allies.

There are several indications of this: In March 2021, satellite images from the US company Intel Lab circulated through media such as Drive and TRT, showing repair and expansion work on a 1.8-kilometre runway on Perim Island. Initially, there was complete ambiguity as to who was carrying out the construction contract. Suspicion immediately fell on the United Arab Emirates, which had wanted to build a three-kilometre runway for fighter jets on the island as early as 2016, but stopped the work the following year. However, at the end of May, according to Daily Sabah, the Saudi-led coalition admitted in a statement carried by the official Saudi news agency SPA that they were behind on the construction of the runway. This is in clear contrast to Yemeni Foreign Minister Ahmed bin Mubarak’s statement, quoted by Anadolu Agency, that “there is absolutely no agreement with anyone on the establishment of a military base on Yemeni soil.”

The incident is reminiscent of a similar episode in late August 2020. At the time, online media spoke of Israeli-Emirati activities on the island of Socotra, a remote territorial outpost of Yemen located 340 kilometers south of Yemen and 100 kilometers off the Horn of Africa. While there is no confirmation of plans for a spy base, from which maritime traffic in the Indian Ocean could be conveniently monitored, Issa Salem bin Yaqut warned in September 2020 that Yemen’s sovereign rights were being undermined. The head of the Socotra tribes was referring to the UAE’s activities to gain a military foothold in the shadow of the Southern Transitional Council (STS) – which took control of the island in mid-2020 – and, on the other hand, to tie the island more closely to the UAE, as recently reported by France24 and Responsible Statecraft.

Reasons for the construction of bases

With their construction projects, the Saudi alliance and the United Emirates are not only securing the islands for their own strategic goals, but are also forestalling similar moves from states such as Russia, which also want to strengthen their power projection capabilities in the Indian Ocean.

The situation poses a great danger for Yemen. If the Yemeni authorities are unable to uphold territorial sovereignty vis-à-vis the outside world and enter into utilization agreements with allies, there will be added incentive for the involved states to play for time, encourage a powerless Yemeni government, and allow the status quo to continue.

Diplomat Gazette Officialhttps://www.diplomatgazette.com/
Diplomat Gazette is the premier international current-affairs magazine for all Regions of the world. Diplomat Gazette’s fast, accurate, news, commentary, and analysis are now read by more than 12 million people in 30 different countries. Find out why by signing up to our Daily Report for all your must-reads from across the world. Diplomat Gazette three main newsrooms and social media hubs are in Kuala Lumpur, Hong Kong, and New Delhi and these are supported by bureaus in Beirut, London, New York, and Singapore. In total, Diplomat Gazette has more than 180 commentators, reporters, editors and multimedia producers working across the globe and this skilled network launched a new interactive site in February 2021.
Share
Facebook
Twitter
Pinterest
WhatsApp
Latest news
Non EU

The Covid-19 Vaccine Distribution: The International Political Economy of Health

Plastic is the most dangerous enemy of the world’s oceans?

UFOs can’t be explained, and this admission is a big deal: Pentagon

A Research Project of Educentric